I have yet to see any problem, however complicated, which, when looked at in the right way, did not become still more complicated

Systems Thinking is a hot topic in the world of evaluation. I’ve read a fair number of articles that talk about systems thinking (particularly around applying the concepts to evaluation), but figured it was time that I did some dedicated reading on the topic, as I find that sometimes reading secondary sources means that some components get missed or connections aren’t quite clear. The book that I chose to read is Thinking in Systems: A Primer (2008) by Donella H. Meadows (edited by Diana Wright), which was recommended to me *and* which is available online for free from this link. 🙂

Here are my notes from Part 1 – System Structures and Behaviour:

Some Types of Systems

2. one stock with one reinforcing loop and one balancing loop (e.g., population and industrial economy) 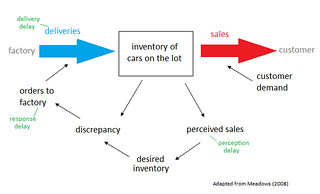 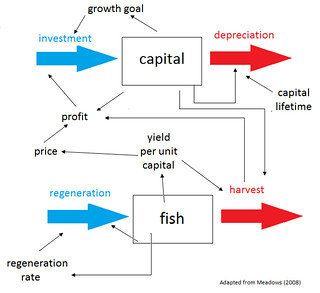 This entry was posted in notes and tagged notes, systems thinking. Bookmark the permalink.