As I’ve mentioned, I’m currently developing an evaluation for the implementation of an electronic health record (EHR) system. Specifically, this project crosses multiple healthcare organizations, will be implemented in dozens of healthcare facilities run by those organizations, and will be used by tens of thousands of clinicians from all disciplines as they provide care for hundreds of thousands 1Millions? of patients. So, you know, easy peasy, right? 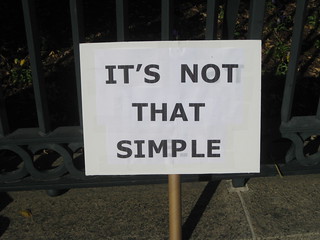 Throughout my career as a program evaluator in healthcare, I’ve seen first hand that healthcare is a complex sector. There are a multitude of interacting actors – clinicians of all sorts of different disciplines (all with their own scopes of practice, standards, regulations, cultures, and expertise), administrators who plan services/allocate resources/run facilities/etc., government mandates to be dealt with, emerging research evidence and health technologies to translate to practice, patients with every sort of health issue imaginable (not to mention their complex social, psychological, economic, and various other facets of their lives), critical privacy and security issues to be managed – and nothing less is at stake than the health and well-being of all of our patients/clients/residents. But this project is, by far, the most complex project I’ve ever seen. Not only is it working to create and deploy a new electronic health information technology (technology is complex)  for all of the healthcare professions (another layer of complexity), but it’s bringing together three separate health organizations, each with their own current processes, varying technologies, and different cultures. It’s a multi-year, multi-site project, so from an evaluation perspective, there are considerations around when different sites “go live” with the new system, what systems they had in place prior to “go live”, and what else is going on in the environment during this lengthy implementation period.

So how, exactly, does one go about evaluating such an initiative? Some of the immediate ways of evaluating if this new program “works” have some obvious flaws:

In the interest trying to figure out how best to plan the evaluation, I have taken a look at the literature. After all, we are not the first place to implement an electronic health record, so why not learn from those who have gone before us? As I’ve been reading, I’ve be reassured by all of the authors who are stating similar things to what I’ve been thinking: this is an extremely challenging type of project to evaluate! Next, I present some of the key points from the articles I’ve read so far.

Building A House on Shifting Sands

Why Do Evaluations of eHealth Program Fail? An Alternative Set of Guiding Principles

There’s a tonne more literature on this topic 3And I haven’t really even gotten to bringing together my own thoughts on all of this – so far it’s just notes from the papers themselves., but this blog posting is already crazy long, so I think I’ll end this one here. But you can expect more on this topic soon!